Keep people from doing risky things and spread a positive attitude to life at the same time? “Love Life” is accomplishing this feat.

The Swiss brand for the prevention of sexually transmitted infections, including HIV, redefines public awareness communication. Bold campaign ideas catch the attention of everyone via broadcast media which link to a highly functional online portal. “Love Life” comes with a light-hearted tone of voice, however risk groups and infected persons will easily find no-nonsense support directly from the experts. 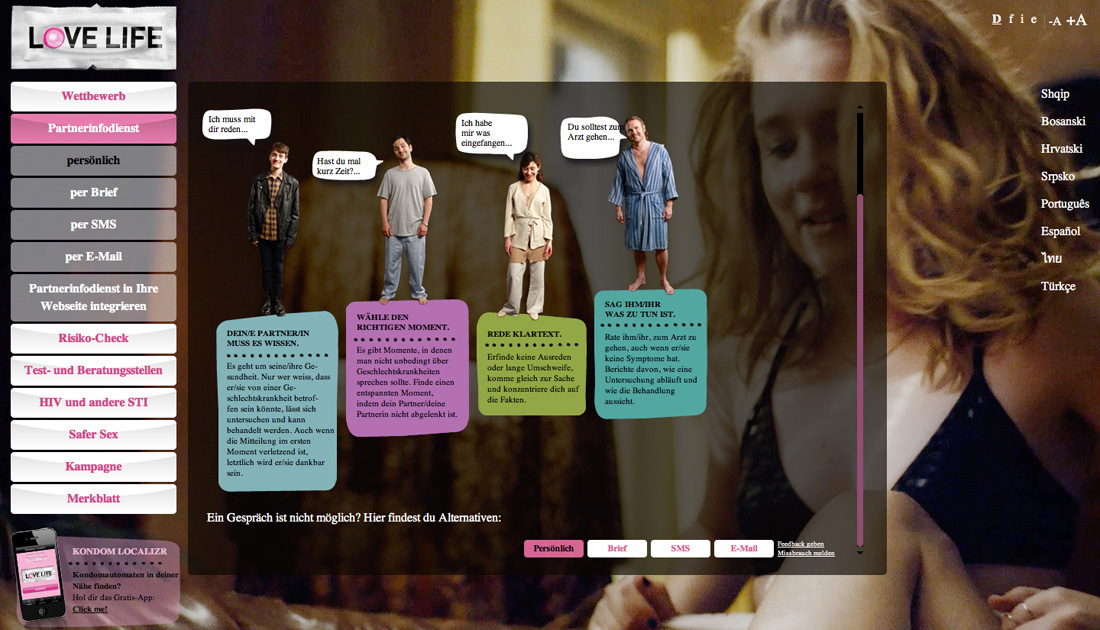 Informing the partner about a sexually transmitted disease is key to stop the epidemic. This website makes it easy. With tips for talking, letter templates and an SMS tool.

“My bumper has dents.”

“Roses are growing in my panties. Talk about sexually transmitted diseases. No matter how.” Posters.
A woman amuses her partner with shadow puppets. He joins in and presents an aching penis. Pay-off: “No matter how you say it, just say it. Talk to your partner about sexually transmitted diseases.”
A woman seeks dialogue with a man at a beach bar. Then they have sex quicker than you know it.
Two guys meet at a tennis match. Seconds later they play with each other. Pay-off: “Too quick to think of condoms?”

“Boom bang. Too quick to think of condoms?” Posters.

A “trojan” thumbnail activates a pop-up that’s not just showing the enlarged portrait of the young couple but how they get down to serious business in the club restrooms. Pay-off: “Too quick to think of condoms?”